IPTV systems deliver a wide variety of content over these networks, such as live television, internal broadcasts, digital signage, "dashboard information" screens, and many other forms of digital media.

TV Server "head-end" equipment is normally located in a comms room with Freeview (TV antenna) and Freesat (satellite dish) signals run from the roof over standard coax or fibre. Encoded Media TV Servers take these signals directly, and deliver them to the network as either unicast or multicast IPTV streams. 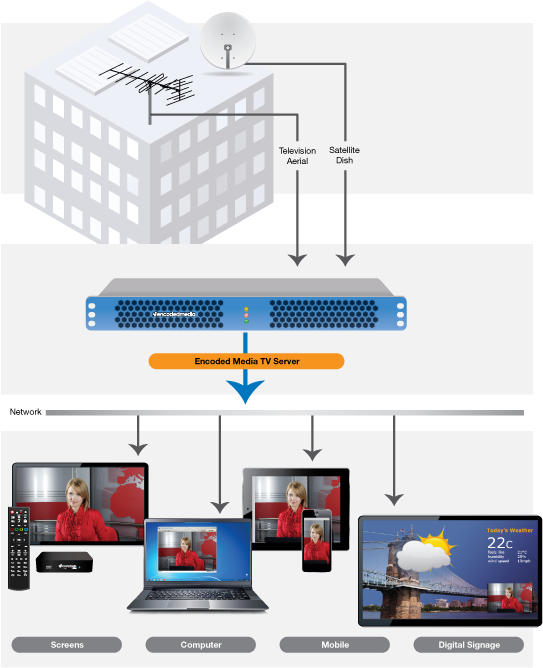 The channels are received right around the network by other devices such as PCs and Macs, digital signage players, IPTV receivers, mobile devices and more.

TV Servers support two types of streaming: unicast and multicast streaming.  Unicast is a form of network communication where the stream is sent multiple times directly to each receiver:

Multicast is a stream that is sent once but can be received by multiple receivers:

The internet is almost entirely unicast: a browser connects to a server and packets flow along a direct connection between the server and the receiver. Multicast is more akin to a radio station, broadcasting a single stream that is received by more than one receiver.

Given the above, and if we assume that Standard Definition (SD) TV channels typically use 2-5 Mbit/s and High Definition (HD) channels use 4-10 Mbit/s, a head-end IPTV appliance delivering 10 x SD channels to 100 users via unicast will use:

This 500Mbit/s usage could be acceptable in a centralised office with a lot of spare capacity, but if for example the network is split between two buildings, and the connection between them is 1,000 Mbit/s, IPTV would over time account for a significant proportion of that connection.

Multicast streaming can help reduce this bandwidth usage, in that each channel is only sent once. In the same scenario described above but using multicast, 10 x SD channels will now use:

Once broadcast by the head-end, a network that is configured to support multicast will distribute that stream to only the users request it. Network switches use the IGMP protocol to work out which users want which channels. 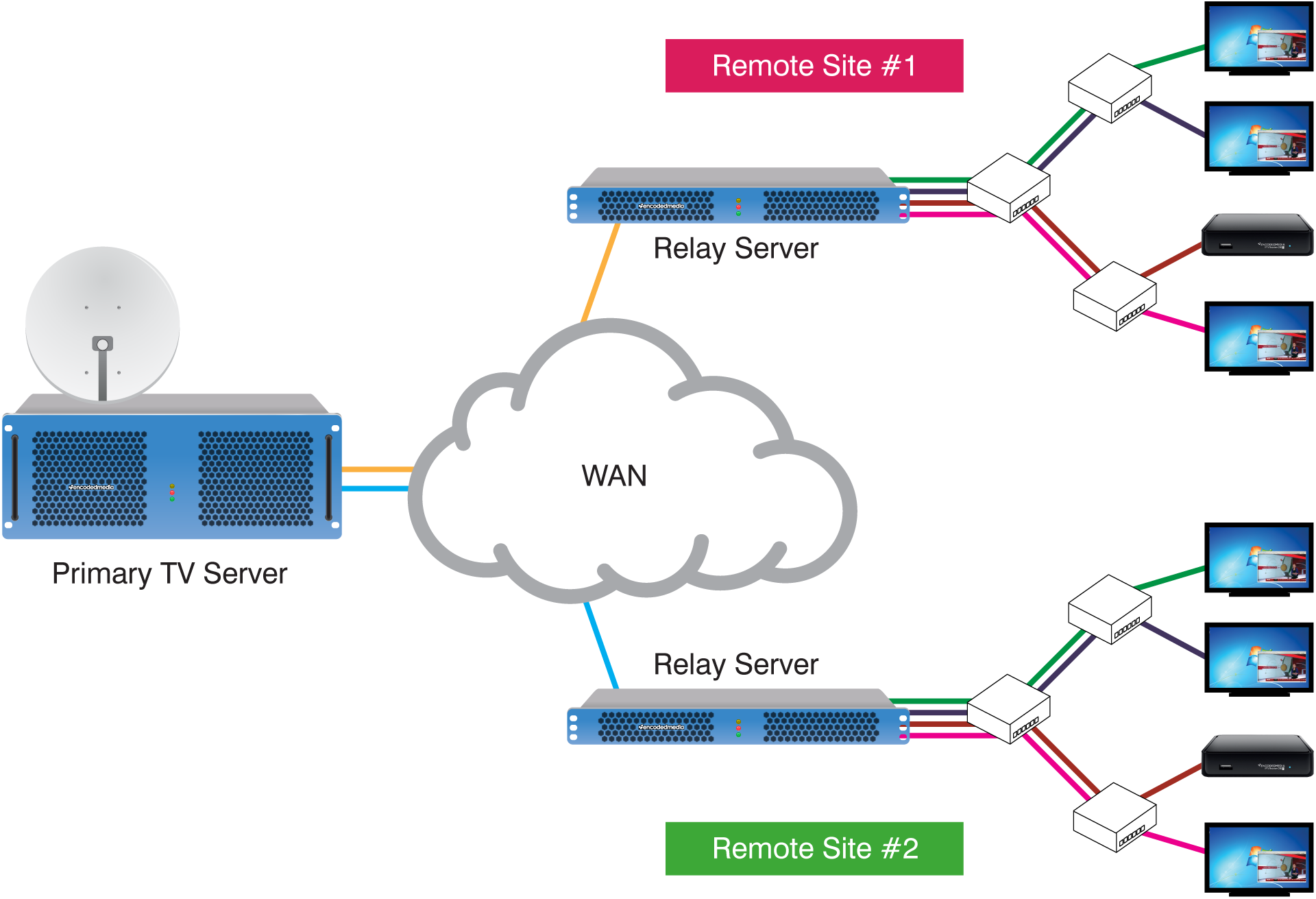 For ease of management, the IPTV head-end appliances and receivers should ideally be placed within the same VLAN with IGMP port filtering. Should the physical layout of the site makes a single VLAN undesirable, multicast routing (PIM-SM) must be configured on the switches.

The server equipment varies depending on the application, but will require the following:

Encoded Media IPTV Receivers are small set-top boxes that can deliver live and on-demand content to screens anywhere that the network reaches. Each box will require the following:

To help test your network for multicast, Encoded Media provides a free tool called McTest. This is able to both broadcast and receive multicast streams.

Encoded Media appliances are designed to protect the network from traffic spikes and unintended overloading.

All live streams are sent as UDP packets containing 7 x 188 byte MPEG-TS packets for a total of 1,316 data bytes. Including the standard UDP and IP headers, these packets remain smaller than the standard ethernet MTU of 1,500 bytes, thus eliminating fragmentation.

Streams can be sent as multicast, static unicast or RTSP unicast. The administrator selects which channels will be streamed, and to what destinations. Multicast and static unicast forwardings are predefined, whereas RTSP unicast are added and removed as clients connect and disconnect over time.

A limit can be placed on the number of unicast clients that will be served simultaneously. Beyond this limit, client connections will be refused. Digital TV broadcasts are encoded by broadcasters with variable bit rates (VBR), so the bandwidth consumed by each can vary over timescales of 10 to 100 seconds. Streams encoded by head-end appliances can also be set to use VBR, the administrator free to choose a maximum bitrate for channels, typically 3-6 Mbit/s.

As well as longer-term variations in the bandwidth used by a channel, packets are also "jittered", meaning they can arrive in bursts of a few milliseconds' duration. Encoded Media equipment applies traffic shaping to eliminate traffic spikes, both overall and on individual streams. Both types of smoothing are important, because the ability of individual client devices to handle traffic spikes can be much lower than that of the network infrastructure.

Smoothing characteristics can be tuned, but typically the appliances will not allow traffic to spike at more than twice the long-term average; smoothing is applied with sub-millisecond accuracy.

Separately, a limit can be placed on the total bandwidth of all streams combined. This limit is intended as a safety feature and is no substitute for selecting an appropriate set of channels given the bandwidth available. If this limit is exceeded, packets will be delayed and in extreme cases dropped to meet the limit.

All other data is sent and received via HTTP. This includes the admin interface and communications with clients, for example to list and request channels. The TCP bandwidth used is negligible.